Posted on October 11, 2017 by Catherine Sherman

On the left is the iconic Kauffman Center for the Performing Arts in downtown. Behind the center are the pylons of Bartle Hall and the gold dome of the Catholic Cathedral of the Immaculate Conception.

In the center is Webster House with bell tower, an antique-filled store and restaurant in a restored Romanesque-style school from 1885. The Webster School was placed on the National Register of Historic Places on September 2, 1982.

Click on this link to see a larger photograph of Downtown Kansas City, Missouri. 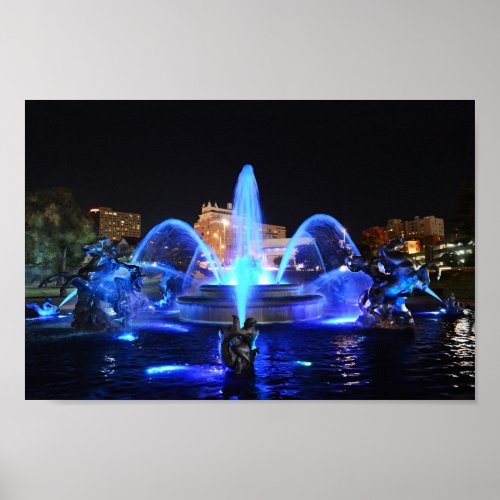 Click on this link to see a larger photograph of J.C. Nichols Fountain in Royal Blue

To see more Kansas City Icons in Royal Blue, click on this link.

The water in the fountain is dyed blue in honor of the local professional baseball team. Kansas City has more fountains than any city in the world except Rome, Italy, and is officially known as the City of Fountains. Community Christian Church, the low white building in the background, featured blue exterior lights in place of its usual white ones. The church was designed by Frank Lloyd Wright. 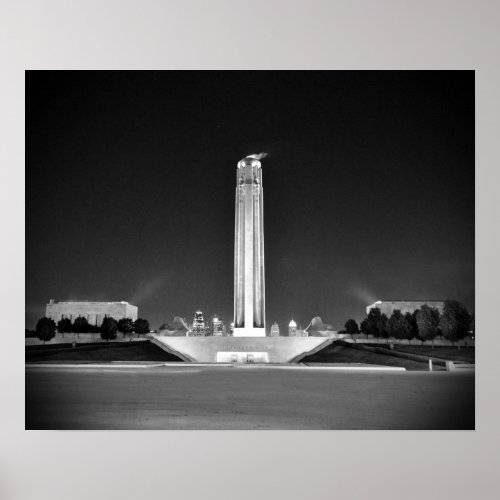 The Liberty Memorial is a memorial in Kansas City, Missouri, to the soldiers who died in World War I. Groundbreaking began on November 1, 1921, and the memorial was completed and dedicated on November 11, 1926. At night, the top of the 217-foot (66 m) tall memorial tower emits steam illuminated by bright orange lights. The Liberty Memorial, which is in Penn Valley Park, houses the official World War I museum of the United States, which opened to the public in December 2006. The building is designed in Beaux Arts Classicism and Egyptian Revival style of architecture with a limestone exterior. The Liberty Memorial is a National Historic Landmark and on the National Register of Historic Places.

A framed print of a replica rocket hangs in this hallway display. The photograph shows the replica rocket standing on the roof of a building in the Crossroads Arts Districts of Kansas City, Missouri. The replica, with the name of a now defunct airline, is a smaller version of a rocket that once stood in a popular west coast amusement park.

Click on this link to see a larger photograph of the Replica Rocket in Kansas City, Missouri.